A DataBank Strategic Acquisition
Pittsburgh and Cleveland Data Center Locations were acquired by DataBank in January of 2017. Read the press release here.

In January 2017, DataBank acquired data center facilities in both Cleveland and Pittsburgh from 365 Data Centers. The acquisition provided DataBank with key interconnection assets in both markets and further accelerated the company’s national expansion strategy. Both markets were identified by DataBank as attractive expansion geographies, and the acquisition provided the Company with differentiated entry points due to the number of top-tier carriers, the downtown locations and the existing high-quality customer bases. DataBank plans to leverage these locations as an anchor for future expansion in each market. 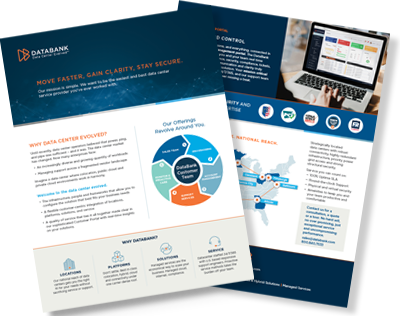 See how we partner with you to design technology solutions that provide a secure, fault-tolerant environment, ensuring 100% uptime of your data, applications, and computing infrastructure.

Talk to an expert