From a single data center in an iconic Dallas landmark, to the largest footprint of data centers and metros in the U.S.

DataBank Ltd. was founded in 2005 in the beautiful historic former Federal Reserve Bank Building in downtown Dallas, Texas. As a federal depository built to withstand any event, the building had excellent bones to become a data center. The 96 year-old landmark building was converted into a data center during the height of the dot-com boom in 1999. Beyond architecture, the founders were cognizant of the market’s growing need for a more personalized colocation solution.

In July 2016, DataBank was acquired by a group of leading blue-chip investors led by DigitalBridge, and the DataBank team merged C7 Data Centers, two assets from 365 Datacenters and Edge Hosting into the fold. The Company also completed several data center build-outs, and made a series of executive appointments, including the hire of current CEO Raul Martynek.

Since then, DataBank has acquired “zColo” (the data centers of Zayo Networks) and four Houston-area data centers from CyrusOne, expanding its footprint to 65+ data centers in 27+ markets, while also significantly boosting its capabilities in managed services, cloud, security, and compliance. 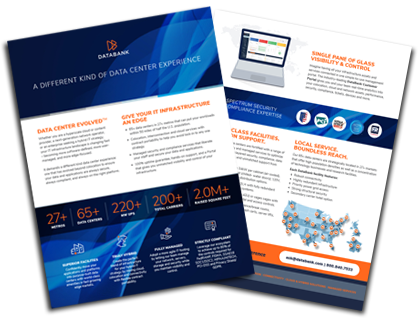 Download our two page corporate overview for a look at how DataBank delivers a different kind of data center experience.
Download Now