Why do DataBank customers choose DataBank? HERE ARE 8 REASONS WHY... 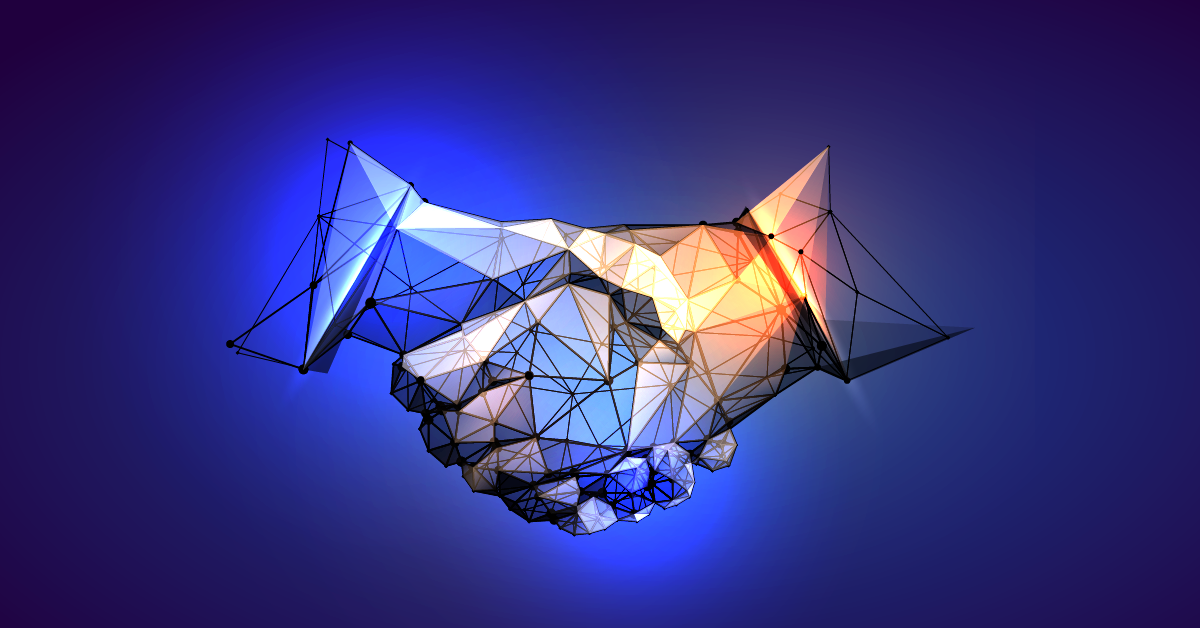 How DataBank is Building Real Culture in a Virtual Workplace

Long ago, DataBank recognized that our Data Center Evolved™ model would ultimately be about our people and the experience our customers have interacting with each of us. We knew how important it would be to establish and maintain a cohesive culture, especially in a workforce that was dispersed across 20 locations and coming together after a series of acquisitions and integrations. It’s why we invested so intentionally over the past few years to make sure all our team members were united by a shared sense of purpose and cultural norms.

The onset of a global pandemic last year, with mandatory work from home requirements, created an especially acute challenge for us as it did for many companies: “How do you maintain the sense of camaraderie, purpose, and cultural cohesion when everyone is working is working remotely?” DataBank found the answer in three particular initiatives: a Cultural Ambassador Team, an online culture hub we call “The Vault”, and a companywide game show called “Keymaster.”

The Ambassador Team Sparks an Idea

Early in 2020, before COVID-19 had reached our shores, DataBank recruited a team of “cultural ambassadors” who would help us champion a new set of cultural cornerstones and bridge both the functional gaps between departments as well as the geographic gaps between locations. Meeting monthly, and serving as front-line observers to our culture, this team became one of our most valuable assets when the pandemic arrived.

About a month into the COVID-19 lockdown, we asked the ambassadors what they were seeing teams at DataBank do to successfully maintain cultural cohesion while working from home. One of the ambassadors shared an idea that had taken root with our implementation team in Utah: a weekly trivia game on Zoom. We discussed packaging the concept up for other teams to replicate, but the conversations soon sparked another, more ambitious idea: a companywide game show. And thus, was born Keymaster – a weekly 30-minute trivia contest, broadcast on Zoom for all employees to watch, with 5-6 contestants each week competing for cash prizes.

The DataBank Vault Provides a Forum 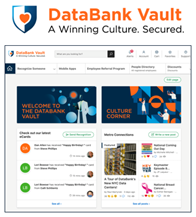 At the same time, these Ambassador meetings were taking place, DataBank was in the midst of developing an online culture hub called The Vault. Utilizing a platform from RewardGateway, the Vault would provide a virtual online “town hall” where employees could set up personal profiles, catch up on internal company news, send ecards to celebrate each other’s accomplishments, receive cash-based recognition rewards from managers, and leverage employee discounts from hundreds of retailers.

Throughout April and May of 2020, as sections of the Vault were being built out for launch, and the concept for the Keymaster was solidifying, it became clear to DataBank’s marketing and culture teams just how well the Vault and the Keymaster would complement each other. During the month of June, a campaign of teaser communications was developed to build excitement for the Vault, and upon launch after July 4th, it became the ideal forum upon which to promote the gameshow, recruit contestants, and even recap each week’s “episode” in the blog.

The Keymaster Brings it all Together

In August 2020, we kicked off Keymaster with a “pilot episode” featuring DataBank’s senior leadership as the initial contestants. For eight weeks after that, we conducted weekly episodes featuring 5-6 other employees competing for cash prizes, with two playoff games and a final championship. 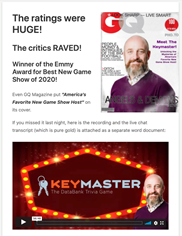 Each 30-minute episode took place on Zoom with our host and the employee contestants on video, and everyone else in the company watching but on mute. Each episode opened with introductions that allowed the contestants to feature their role and department in the company, helping to build awareness across the organization. And at least one of the trivia segments in each episode involved “DataBank Trivia” helping to build awareness and drive home our important cultural messages.

In addition, we allowed employees who were viewing the show to post in the Zoom chat and this became one of the most interactive components of the experience. It opened the door for hilarious dialog that often rivaled the game itself for entertainment value and which our host often incorporated in real-time to the game commentary. We also recorded each episode and put the video and the chat transcript into a blog post the next day on the Vault for anyone who couldn’t attend live.

The response to Keymaster and the Vault was tremendous. Employees eagerly anticipated each Thursday night episode of Keymaster, often saying it was the best 30-minutes of their workweek. It created a fun, shared, company-wide event that everyone could be a part of in real-time, or catch up on the next day. And the Vault has quickly become the center of our company culture vibrantly bringing to life the behaviors the are the hallmarks of The DataBank Way. In just the first three months of its operation, the Vault has seen an 11x increase in peer-to-peer recognition between employees and departments, and almost 95% participation across the employee base.

The combination of these three initiatives made a tremendous impact on the sense of cultural cohesion at DataBank in 2020, demonstrating that it is possible to build a real culture in a virtual setting, even in the most challenging of times.